When the Yonge Street Arcade was built, it presented a revolutionary concept in the retailing history of Toronto. It was inspired by the 19th-century glass-roofed gallerias of Europe, the Galleria Vittorio Emanuele II in Milan, Italy, being one of the prime examples. By the 1880s, Toronto’s retail trade was increasingly dominated by three highly successful stores — the Golden Lion, Eaton’s, and Simpsons. Smaller merchants had difficulty competing as there were few downtown rental spaces that were affordable. The Canadian Loan and Investment Company realized that this presented an opportunity for a profitable enterprise. It purchased land on the east side on Yonge Street, at 131-139 Yonge Street, opposite Temperance Street. The site extended east from Yonge to Victoria Street, where its postal address was 18-26 Victoria Street.

On the land, they proposed erecting a shopping arcade with multiple small-sized retail spaces. Charles A. Walton, an architect born in Leeds, England, was hired to design the building. He created a four-story structure on Yonge Street, its facade of red bricks and Ohio sandstone. Similar to most 19th-century architecture, it contained classical ornamentation, including Corinthian pilasters (three-side columns). On the north and south ends of the facade facing Yonge Street, atop the fourth floor, there were small ornate towers, and a taller tower in the centre position. The enormous arched entranceway, two storeys in height, led to a galleria behind the four-storey structure.

The galleria, 267 feet in depth, was three storeys in height. The roof was crowned by a cast-iron frame that supported sheets of plate glass. It was 35 feet wide, and soared 120 feet above the ground floor. It flooded the interior with natural light, the building’s steam heating protecting shoppers from Toronto’s bitter winter weather. The galleria was similar in concept to the Eaton’s Centre and Brookfield Place of today, although the latter two have the benefit of air conditioning.

The Yonge Street Arcade was the first structure in Toronto that resembled a shopping mall, though it was much smaller than those of today. Construction commenced in 1882, and it was officially opened in the summer of 1884 as part of the 50th anniversary celebrations of the city’s incorporation (1834-1884). The ground floor contained 32 shops. Wide staircases and hydraulic elevators permitted shoppers to access the second floor, where there were 20 more shops, connected by a balcony. On the third floor, there were artists’ studios and an assortment of offices. The shops were only 12 feet in width, although those on the first floor possessed full basements. The leases signed by the retailers stipulated that shops were not allowed to duplicate products and items that other merchants sold. This was to ensure as much variety as possible for shoppers.

I remember visiting the Yonge Street Arcade in the early 1950s as there was a philatelic (stamp) shop on the ground floor, near the Yonge Street entrance. I was an avid stamp collector at the time. Collecting stamps was a highly popular hobby in those years, as it provided an opportunity to collect authentic souvenirs from countries throughout the world. This hobby has now been eclipsed by more modern collectables, although philatelic shows still exist.

By 1950, because the Arcade had not been well maintained, it was deteriorating. In 1953, there were two fires in the building, their causes never determined. In January 1954, merchants were ordered to vacate the premises. It was not demolished until 1955, when the site became a paved parking lot. In 1960, a ten-storey building was erected on the site. It contained retail shops on the ground floor, and above them, mainly offices. In 2008, vertical rows of LED light were installed on its west facade.

It is a pity that Toronto lost this historic structure to the wrecker’s ball.

A booklet prepared for the official opening of the Arcade in 1884. Toronto Public Library, r- 1520

Interior view of the Arcade in 1885. The gentlemen in the photo are standing on the balcony that connected the 20 shops on the second-floor level. On the ground floor, the Yonge Street entrance is visible at the mall’s west end. Toronto Public Library, r-1493.

View looking north on Yonge Street from near Adelaide Street c. 1912. The four-storey Arcade building on Yonge Street is visible, and behind it, the cast-iron three-storey galleria with the glass roof. To the north, in the far upper left-hand corner of the photo, is the Confederation Life Building at Yonge and Richmond Streets, constructed on 1890.  Ontario Archives, 10009549.

View of the ground-floor level of the Arcade in 1952,Toronto Public Library r-1478.

View of the ground-floor level of the Arcade in 1952, Toronto Public Library, r-1480

Gazing east on Temperance Street at the ten-storey building that was constructed on the site of the Yonge Street Arcade. On the left is the restored Dineen Building, on the northwest corner of Yonge and Temperance Streets. Photo taken on July 26, 2016.

Gazing north on Yonge Street from Adelaide Street. The ten-storey white office building is on the site once occupied by the Yonge Street Arcade. The Confederation Life Building can be seen to the north of it. Photo taken July 26, 2016. 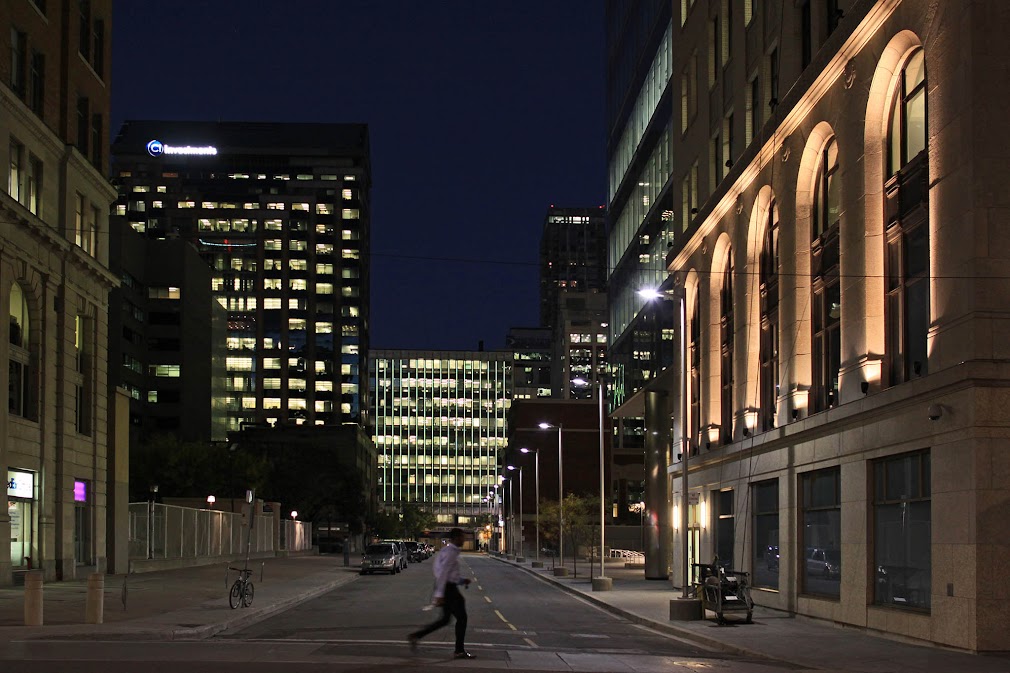 To view the Home Page for this blog: https://tayloronhistory.com/

For more information about the topics explored on this blog:

The publication entitled, “Toronto’s Theatres and the Golden Age of the Silver Screen,” was written by the author of this blog. It explores 50 of Toronto’s old theatres and contains over 80 archival photographs of the facades, marquees and interiors of the theatres. It relates anecdotes and stories by the author and others who experienced these grand old movie houses.

To place an order for this book:

Another book on theatres, published by Dundurn Press, is entitled, “Toronto’s Movie Theatres of Yesteryear—Brought Back to Thrill You Again.” It contains over 125 archival photographs and relates interesting anecdotes about these grand old theatres and their fascinating histories.

The book is available at local book stores throughout Toronto or for a link to order this book: https://www.dundurn.com/books/Torontos-Local-Movie-Theatres-Yesteryear

Another publication, “Toronto Then and Now,” published by Pavilion Press (London, England) explores 75 of the city’s heritage sites. For further information follow the link to Amazon.com  here  or contact the publisher directly by the link shown below:

Paradise Regained –the restoration of the Paradise Theatre

The Story of the Roy Thomson Hall